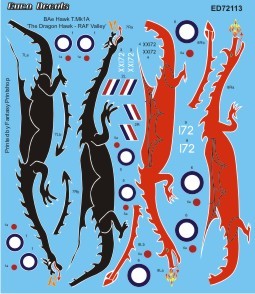 Here is a new set of transfers from Euro Decals, produced by Fantasy Printshop. Beautiful print quality and colours, this same set is available in your choice from 1/72, 1/48 and 1/32 scales. They represent the same aircraft, from either 1995 or 2001. Hawk XX172 is on the station flight at RAF St Athan and has a Dragon painted along each side of the fuselage. For 1995 it is a black dragon over a red/white/blue fuselage wheras in 2001 it has a red dragon on the overall gloss black finish to the aircraft. Add new roundels and serials, there are ideal for the Airfix kits in either 1/72 or 1/48, thile they also offer a distinctive alternative for the big 1/32 kit from Revell, one which we saw member Sean emmott finish as a Red Arrows aircraft not that long ago. The colour plans provided are the same in whichever set, and are illustrated below, so you get to know where the individual transfers are positioned on the model. The quality of the printing is first class and you have an option for something a little different for a Hawk model other than a Red Arrows example, whatever your preferred scale.

The BAE Systems Hawk is a British single-engine, jet-powered advanced trainer aircraft. It was first flown at Dunsfold, Surrey, in 1974 as the Hawker Siddeley Hawk, and subsequently produced by its successor companies, British Aerospace and BAE Systems, respectively. It has been used in a training capacity and as a low-cost combat aircraft.
This site uses cookies: Find out more.