This is one of their new sheets and it covers FAA Martlets/Wildcats in the disruptive camouflage scheme. In this area things vary somewhat as initial Martlet deliveries were from a French order so the colors of these planes are Sea Green 28, Flag Blue 24 over Light Blue 27, very similar to the FAA’s tropical scheme. These aircraft also had the port underside of the wing in night as was the norm for the time.

The rest of the aircraft on the sheet are in the Temperate Sea Scheme of Extra Dark Sea Grey and Dark Slate Grey over the Light Blue for early repaints. Later aircraft used Sky type ‘S’ on the underside, these can be spotted as the Sky tends to sweep upwards to  meet the underside of the wings.

The sheet provides markings for 7 different aircraft. This is mixed between the ‘short tail’ and the ‘tall tail’ variants. Suggested kits for this sheet are by Hasegawa for the Martlet and Sword for the Wildcat VI. There are other kits out there that are all a bit long in the tooth including the Revell Wildcat and the Airfix FM-2, should you have those in the stash and be wishing to use them instead. 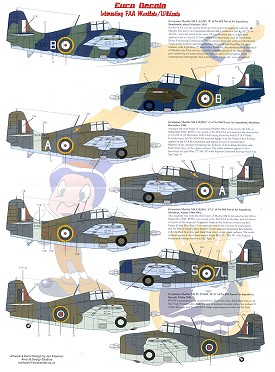 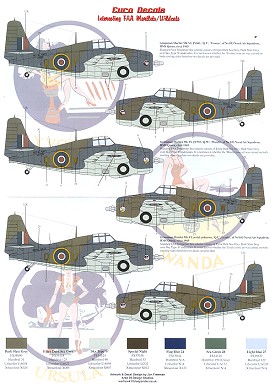 Here is what is included on the sheet in the order shown:

The instructions are superbly printed on glossy paper and provide both sides as well as upper and lower painting and placement guides. The decals themselves are equally as outstanding. There is not a hint of misregistration, the decals are glossy and have very small clear carriers; in short, they are perfect.